The park district has required us to make a few small changes to our current rules:

Courts 5-6 will be designated as a Beginner Courts.  These courts may be used as part of the "4 on 4 off" rotation, but must be vacated upon completion of your game if a group of beginners are waiting. 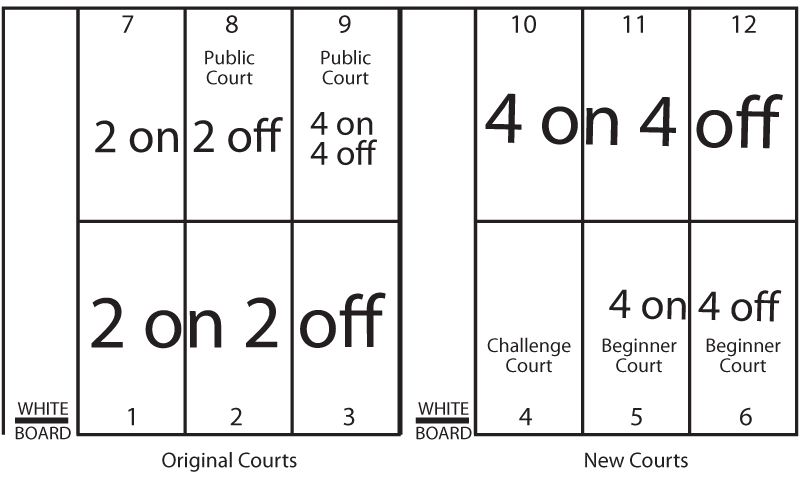 It's that time of year again – time to vote on membership dues and club officers for 2020.

In order to proceed with the results of the vote, we need at least 10% of membership to vote.  We've set up online voting this year to make things quick and easy for you – so please, take a minute to help out the club by casting your vote.  You will find the link below.

In early 2019 the decision was made by the members of Sunrise Pickleball Club (SPC) to increase membership dues to $50 per year. This was voted on and passed by the members. This increase would last through 2019, then revert back to the original $25 per year at the start of 2020.

In addition, any SPC Club Tournaments that raise money will be added to the club account to help pay for insurance and other bills.

Thanks so much for your support and understanding.

Last month we held an open board meeting to discuss how the 12 courts could best be utilized by our members.  We had a great turnout with many members expressing diverse opinions and experiences.  After careful consideration, the board approved the following court rotation rules, which will go into effect this Sunday, August 25th.  It is very important that everyone read and understand the new court rules which will apply during all club hours – Sunday-Friday, 7am-12pm and 5pm-10pm.

PLEASE SEE BELOW DIAGRAM as the court numbers have changed! 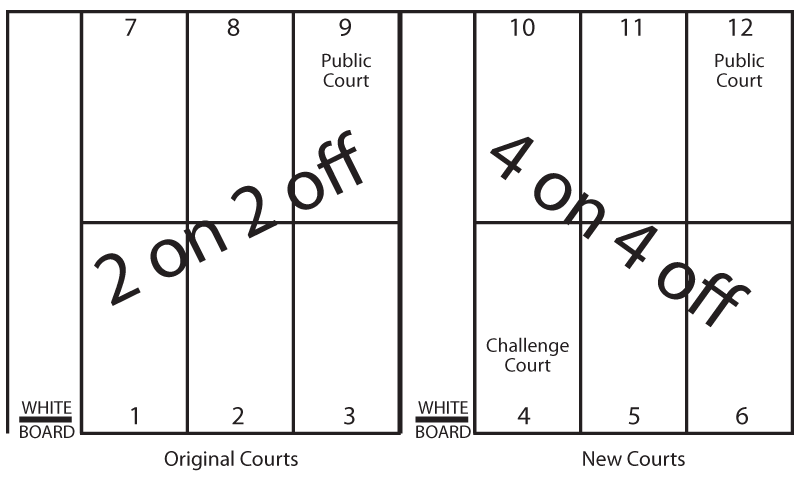 Courts 1-3, 7-9  (the original six courts) will follow a "2 on 2 off" rotation at all times.  Winners stay and split.  This will allow players who come as individuals to easily get into the mix.

Court 4 (on the new courts) is the Challenge Court.  2 on 2 off, with winners staying together.  Winners no longer need to come off after 3 consecutive wins.

Courts 9 & 12 are designated as Public Courts.  This is being required by the park district and it is important we honor this new policy.  These courts are available to non-members, and must be vacated upon completion of your game if members of the public are waiting to use it, even during club hours.  If no members of the public are waiting, then these courts will be used as part of the general rotation on their respective sides. Please be aware that the club cannot require that the general public follow our rotational rules.

If you have any questions, contact us.  Please try out the new system over the next few weeks, and then let us know your feedback.  We are open to continually refining things in order to best serve our membership and maximize enjoyment of the 12 courts.

Election Results for 2019 Board of Directors

A member vote was held at the general meetings prior to the Round Robins on October 13-14. Our new Board of Directors for 2019 was elected as follows:

The Member at Large positions are remaining the same:

"We are pleased to present the 2018 USAPA\IFP Official Tournament Rulebook! This revised rulebook has been 2 years in the making and is a result of countless hours from the USAPA Rules Committee and careful review by the USAPA Board of Directors."

Click here for a summary of only new/revised rules.